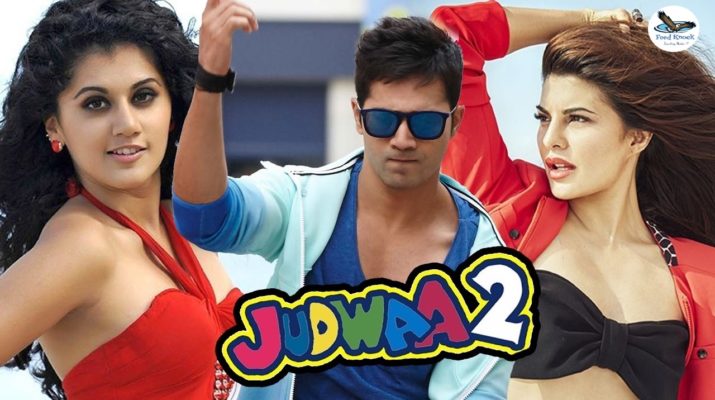 The sequel to  David Dhawan’s  1997 film Judwaa is ready to release on 29th September 2017. In this Movie, Varun Dhawan (Raja / Prem) is playing a double role as twins and Jacqueline Fernandez & Taapsee Pannu is playing the role as Alishka & Samaira opposite to them.

This Monday, the most awaited trailer is Judwaa 2 was unveiled after the stunning event in Mumbai. The trailer was unveiled with more than 200 twins who are invited for the launch of this amazing movie trailer. These twins are from various cities in India. Taapsee Pannu also tweeted a pic along with few twins.

With the huge support of all the fans, this movie trailer got 14+ Million views in just 24hours.

This is amazing thank you for the laughs and love. 14 million views in 24 hours #judwaa2 https://t.co/ksOsW3sIOI pic.twitter.com/Ll7nuD9Z3O

The trailer starting with the funny moments and describing the problems of Dhawan without showing the secret of twins. And shows a lot of drama with the mixture of pure entertainment with action, comedy, and romance. In this trailer, Prem, who is a simple innocent guy & Raja who is a street smart and a guy with power is the twins brother whose father is a businessman. This trailer shows too much of twist when Jacqueline Fernandez & Taapsee Pannu confused about Who is Raja and Who is Prem. In the end of the trailer, there was some action too. So we hope this movie gonna recreate the magic of Salman Khan.

The film has been produced by Sajid Nadiadwala who doesn’t need any introduction. All the casts of this film are new. The Production company of this film is Nadiadwala Grandson Entertainment and it is distributed by Fox Star Studios. The music of Sajid-Wajid, Meet Bros, Sandeep Shirodkar and Anu Malik will also make a great presence in this movie.

I am sure with the support of Salman Khan  & Fans this movie will surely gonna be a super duper hit. All the very best to all cast & crew of Judwaa 2 from FeedKnock.

An App That Brings The World Together: CitizenChat App

Do you know there is a new SuperHero at #ComicCon?

3 thoughts on “Will Raja-Prem Ki Jodi recreate the magic of Salman Khan: Juwdaa 2”